No guarantees, but I think the best way to enjoy the latest installment in the RESIDENT EVIL series is to see the film late at in a crowded theater with a bunch of people who clearly consider movies of this ilk to be the best that Hollywood has to offer.

Anything else and you go at your own risk.

RESIDENT EVIL 3: EXTINCTION (henceforth called RE3) follows the further adventures of Alice, a genetically-engineered hottie played by Milla Jovovich who travels through a zombie-infested Earth searching for answers the audience really doesn't care about, so long as they get lingering glances of her scantily-clad body and plenty of gory kills against zombies and other assorted baddies, including (but not limited to) red-neck cannibals, crows infected by feasting on zombie flesh, and your run of the mill Mad Scientist who injects himself to become a super-human slab of hamburger meat. In other words, RE3 is about Alice kicking ass and look good doing it.

And despite massive gaps in logic and coherence, our audience ate it up.

A few components do work. I can watch Milla Jovovich eat a peanut-butter fried sandwich and not be totally disappointed. Director Russell "I made HIGHLANDER 21 years ago" Mulcahy tries to inject a sense of the epic to the proceedings, but a weak script and limited budget leaves the viewer with lots of scenes of driving in the desert and the (admittedly cool-looking) trailer clip of the swallowed up Las Vegas strip suffice. Making the decision to move the franchise out of the dark and into the light of the desert MAD MAX style was a bold move - the major set pieces now take place in broad daylight, and in wide open places.

And to a small extent, it works. The crow attack is pretty fun, and is probably the highlight of the movie. The tension of wondering how the band of survivors is going to get out of this alive remains palpable until, like the swift hand of the Almighty, or at least the hand or a poor writer, Alice swoops in the save the day with newly discovered superpowers, including the ability to generate a force field and (as near as I can figure) control fire. Deus ex Machina, anyone?

By the time of the second major set piece I had already stretched my suspension to the limit with enough stupidity to kill off more brain cells than a Grateful Dead concert. In a nutshell Alice and the gang are attacked by a group of zombies who have been injected with a serum made from the same genetic material that formed Alice, giving them (you guessed it) super speed and agility. There is much shooting and kicking and slow-motion shots of Milla Jovovich's thighs as th movie nose-dives into tired MATRIX territory before finally going back underground to the secret Umbrella corporation base where Alice has to ward off the nastiness of your generic evil scientist-type who has injected himself with the virus. This has the effect of making him really ugly. And giving him enormous tentacles for fingers. You figure it out.

On the fear front, the movie replaces genuine fear and horror with TONS of cheap "jump" scares that always are cued by a silence in the soundtrack. No sound? Cue the zombie! The only thing worse is the glut of loud, sudden sound effects. If a zombie wasn't suddenly jumping into frame, then a loose electrical wire was popping louder than a sonic boom.

Does it work? Well, again I think depends on the atmosphere in which you watch the movie, and your ability to completely suspend logic and go with the flow. It took me about 40 minutes before I really lost patience with the film and simply waited for it to end. My favorite part of the movie actually came 5 minutes in when, in response to a flashback opening of Jovovich lying naked in a shower stall my friend Bob leaned over to me and whispered, "Evil resides...IN MY PANTS!"

For anyone who really cares about this type of thing and wants to keep count, RE3 is loads better than RE2, and just behind RE1, which has more Milla and a fantastic first 15 minutes before going slowly downhill.

Give RE3 +5 for Psionics, though. Gotta love Psionics. 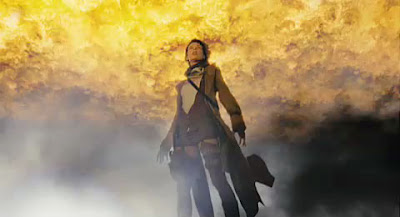